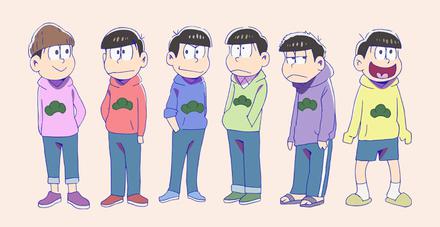 When I was a child, I could watch the same thing over and over again as if every time was the first time I was seeing it. Nowadays, I don’t have the attention span for that kind of thing. So, when I say I watched the Osomatsu-san movie 3 times and I wish I had had even more time to re-watch it, well, then it must mean I really, really liked it. Although, I have to admit, that I am a sucker for a gag anime. Gintama, The Disastrous Life of Saiki K., and Osomatsu-san. I just can’t get enough of them.

I was happily surprised when I saw that Crunchyroll had added the Osomatsu-san movie. By happily surprised, I mean that I was filled with an energy, the kind you get from a renewed sense of purpose, that immediately woke me up. I was actually excited 😀 I had to renew my premium subscription right away because I didn’t have the patience to wait for a week to pass by. And, it was lovely and completely worth it for me.

To quickly summarise Osomatsu-san, it’s about sextuplet brothers in their twenties, and they’re all NEETs (not in employment, education or training), and it’s hilarious. Each brother has distinct personality traits and wears a particular colour. Personally, I’m a Karamatsu girl, but I love them all.

I don’t want to spoil the premise of the movie, but other than just being pure, blissful fun, it really made me think about some things. For instance, even though I sometimes wonder about how I got where I am in life, and feel dissatisfied and restless, I don’t have any regrets and I wouldn’t want to repeat my younger years. If I could talk to my teenage self, I’m not really sure of what I would say, honestly. Except, yeah, I like you. I like us. Keep being yourself.

Anyway, I’m off to watch this move again. Might as well make it a fourth time.